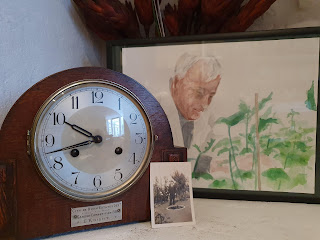 We all have someone who influenced and inspired us to grow, garden and enjoy working the soil. My granddad was mine and I spent many hours watching him lose himself in both his and my mum’s gardens. When I first got my own garden, he was there with plants and support.

Recently I looked closely at the clock he always had on the mantelpiece and I now have, and I read the plaque on the front. 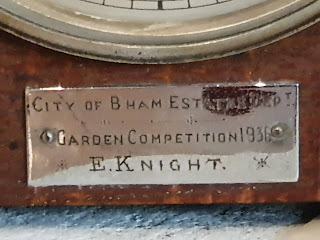 I was always told he won a big competition in Birmingham but was the clock his or his father’s, who also was a big gardener? Why was he down just as ‘E Knight’ when I knew him as Albert Edward Knight?

A telephone conversation with my brother didn’t give me the answers I sought and my daughter told me that there was a line of professional gardeners in the family I didn’t know about and so again adding to my confusion. 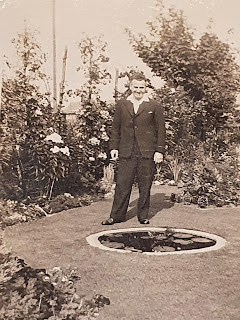 This weekend I received an envelope from my brother and inside there was a card, short note and a photograph. He had found the picture in the old photo albums. On the back of the photo in my mum’s handwriting it said, ‘Pops by his pond 1938.’ It did not confirm the clock and award was both his and linked but the evidence clearly pointed to it.

In the photograph he stands with his constant cigarette in hand on an immaculate lawn, surrounded by flowering borders and over what could best be described as a little pond. The pond looks odd and out of place but then it was probably a big novelty in a back garden in Birmingham.

The picture above also has my painting of him as I knew him dis-budding his chrysanthemums with that constant cigarette in his mouth.

The clock may not be worth a lot financially, but it is priceless to me as my link to him and my gardening genes.

I now need to try and find out more about the competition and his award. How big was the competition as Birmingham was a big city even then? What was deemed special about the garden? Many questions I wish I had asked him or my mum, but alas I never did, and at the time to me it was just a clock on the mantelpiece. I am so pleased I kept it.

I'd love it if anyone can tell me more and connect me to that bygone garden competition and the clock.
The clock strikes the quarter past the hour and some 82 years after being presented is still working perfectly well.

Martyn Daniels
Martyn is a retired businessman with diverse experience gained in many business sectors. He continues to actively support and contribute to many community and social groups and has been a plot holder and an officer of Isle of Dogs and District Allotment Society for a number of years www.iodadas.com. Currently Martyn is the Chairman of the Society and this year has been designated to be elected the Regional Representative for London for the National Allotment Society. In the past Martyn wrote some 2500 articles about publishing and technology in his blog ‘Brave New World’ and was invited to speak on many international platforms on the subject. Martin’s artwork and art thoughts can be found at www.martyndaniels.com