Raising the Bed Day 1 and 2 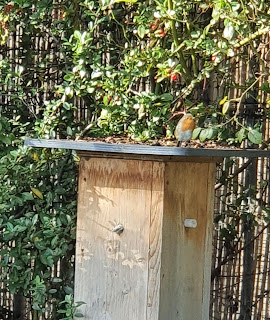 ‘Who painted those bits of timber?’ asks Robin staring down at his feet.

I reply, ‘I did of course. Nice colour, it’s Forest Green.’

‘I know it is green. I have it all over my feet!’ exclaims Robin pointing the tips of his wings towards two green feet’.

‘Sorry, but it will wash off.’

‘If it will wash off why did you put it on?’ answers a bemused Robin.

I’ll have to think about that one as watch him hop off to a new perch with his new green undercarriage.

The debate over raised beds and whether they are fashion or the true and only way to grow will continue and many will dig in and remain rooted in their viewpoint. Like dig versus no dig opinions are often fixed and aligned to one side of the fence or the other.

On day one we started our raised bed venture. Would we have started if we had not been given a load of timber decking? I doubt it.

In response to the post Grenfell building and insurance licence needs, our estate has had to ban timber decking from balconies and any installed have had to be removed. So, armed with good timber reclaimed from just a couple of balconies and which was destined for the skip, we decided to build some raised beds.

Like many gardeners one skims the hundreds of ‘how to’ and ‘best approach’ information that litter the internet and then decide to do it our own way. Many will say, ‘that’s wrong’ or ‘good idea’, but…

So first the decision was taken not to do the whole plot but one area some 18 feet by 16 feet and to leave the rest as is. The area is relatively flat and has good soil.

The second decision was the size and layout of the beds. I did not want to create loads of unproductive paths but equally I didn’t want huge beds I could not lean over and touch all within. The timber dictated both length and width and even height. So they were to be two metres long and one metre wide with four beds across the back and three at the front. As for the height two planks or just shy of a foot.

I know some say it’s not a raised bed unless its 2-foot-high, others have different heights but as I said, timber dictates and frankly there is no right or wrong answer just opinion.

The next exercise was to level the area which sounds easy but is not and it’s interesting to find a slope you never knew. Then we laid a sheet of tarpaulin across. The tarp eventually would sit under the paths and the edges of the beds and be cut inside the beds and rolled back and up inside the timbers to offer some protection. But for now, it protected the soil and hopefully deterred Mr. Fox.

As AstroTurf was also coming off balconies and going to land fill I collected enough to lay on top of the tarp to make the paths. Some may argue that Astro Turf is not environmentally friendly and I would agree but it is better to be used here than be dumped in landfill and some would say it is effective recycling and best of all, it’s hated by slugs.

Halfway into making the frames it started to rain and I was running out of screws, so rain stopped play on day one. 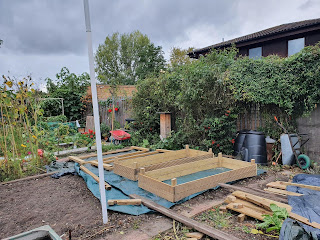 Day two I discovered Foxy had proudly examined my work and left a huge sloppy mess on the planks. Was that his endorsement of the work or what he thought of it?

Today I quickly finish off the fourth of the raised beds and line them up for painting.

I think it better to get the back beds tucked in and asleep than build more and find problems.

The work is interrupted by some nice rotted manure coving available at the farm. So armed with wheelbarrow and bags, eight large sacks are collected and piled onto the plot. Muck is heavy and an old man’s back aches with the loads, so it is back to painting.

I have a crowd of spectators gathered around to see what is happening. Squirrel sits on top of the last sunflower busy scoffing the seeds and pretending he is at some sporting event and sitting back watching the action. Lottie is on her bench and has one eye on me and one on the squirrel and dreaming of the chase. The black and white moggy from the farm is creeping around the back of the plot watching me. The Robin is perched on the bee house.

This is where the sloppy fence paint ends up on your hands, on the floor and all over your clothes and shoes and if you are lucky, the frames. It’s a good job I’ve got a green tarpaulin as it hides the drips and splodges of paint. 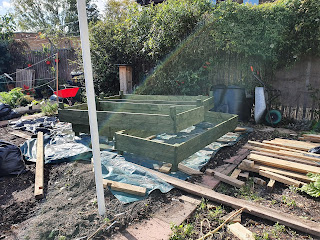 I finish off two frames and then take a break before swapping them over to paint the other two. The paint may look dry, it may be touch dry, but you end up with paint lines all over and hoots of laughter from the audience. That is except for Robin who is now puzzled by the green footprints he is leaving behind him and uttering expletives at me under his red breast.

‘I heard that!’ I shout across at him.

Finally, job done and time to go home and I look proudly over my paintwork and think tomorrow they will be lined up and filled.

Just then a pigeon who must have been on a recce deposits a nice white dollop on one of the frames. Are they trying to tell me something these neighbours of mine?

Martyn Daniels
Martyn is a retired businessman with diverse experience gained in many business sectors. He continues to actively support and contribute to many community and social groups and has been a plot holder and an officer of Isle of Dogs and District Allotment Society for a number of years www.iodadas.com. Currently Martyn is the Chairman of the Society and this year has been designated to be elected the Regional Representative for London for the National Allotment Society. In the past Martyn wrote some 2500 articles about publishing and technology in his blog ‘Brave New World’ and was invited to speak on many international platforms on the subject. Martin’s artwork and art thoughts can be found at www.martyndaniels.com