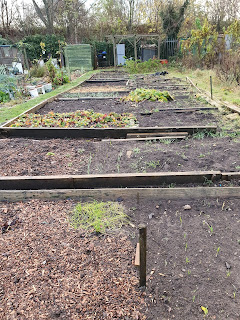 Renting out six half starter plots over two days is an experience and enables you to look at the site through a different pair of eyes.

You arrive at 1030 for the first appointment. Papers at the ready but no one turns up. 1050 you try and contact them to see if there is a problem and you get through to someone who sounded not well and who says they already have said they could not come. You look again at the paperwork and after a quick exchange of texts with the Secretary realise you have been a plonker. They had already told you about the illness, but you had mixed it up with the other names on the schedule.

It’s a long time till the next appointment at 1230!

‘Let’s go and get a cup of tea at the café’ I say to Lottie. She rises from her snooze and starts to trot behind me and looking decidedly bored.

At 1230 a knock on the door and a man pokes his head inside.

‘I’ve come for my wife who can’t make it today.’

Is it me, did I just not read the list, or are all the applicants falling ill today? I greet him and we start to chat through allotment life, plots and their planting aspirations. It’s great to hear a new starter’s enthusiasm and focus on the end harvest and not so much on the work to get there.

I show him the first plot and he certainly is smitten. It’s like watching those house move programmes on TV but this is a ‘Move to the Plot’. They start to see beans there, a couple of rows of spuds over there, spinach down there and are already sitting in a chair at the back of the plot having a cuppa.

Everything is fine but he stops, turns and says, ‘I just need to take some pictures to send to the wife.’

The thought of showing him 6 plots and having them virtually inspected by his wife sends me looking at my watch. Just as I resign myself to a long process, all confirmed by photos over the internet.

He returns, ‘OK we’ll have it, and it was the one she wanted.’

‘How did she know which plots were on offer?’ I ask.

‘Our neighbour showed them her and turns out the next door plot is hers.’

‘Oh, great,’ I reply, wondering if all today’s appointments know what they want too and have friends in the next plot?

At 1430 the last one of the day turns up and has a certain presence about him. He claims not to speak much English but had no problem understanding what I said and interjected with some thoughtful questions.

We went to look at the plots and he went straight to the plot I had just rented and when I showed him the other half of the plot he asked, ‘Can I have the full plot?’

‘No and that other half has just been taken.’ I replied.

‘My friend told me this one was available as a full plot?’

I replied, ‘Sorry only half plots and as I said it has been taken.’

His face showed some disappointment and when we reach the other plots on offer his mood remained subdued. I bet his friend has not shown him these ones. However, he finally decides, and  number two is done, and we move to day two. You cannot rush these people; they have to be happy both with the plot and its aspect and of course the work they will have to put into it to make it theirs.

The first plot is rented in no time and to a nice chap who seemed to know what he wanted and again it was a full plot!

Number four was a challenge. They obviously had friends but not ones on other plots and it was clear this was not only their first allotment but also going to be the first time they had picked up a trowel, fork spade or grown from seed. I have the perfect plot for you I thought as we walked towards it.

This plot is in perfect condition and the previous owner has moved up to a full plot that is only two plots away.

Everyone looks around at the other plots when they arrive, and you can read their thoughts. Plot envy is often in their eyes as they look at the full-sized plots. They clearly aspire to have a full plot and I’ve never heard anyone say that they would rather have a half plot.

It seems to take an age for them to decide but when you don’t know what you want, it often does.

Having agreed to take the plot we walk back and I realise just how little they do know about growing. They will soon learn and appear very positive. You can just imagine what will be under their Christmas tree this year all neatly wrapped up with ‘to him’ and ‘to her’ tags. Yes, they will be buying each other spades, forks and trowels this Christmas. It will be hard to disguise a spade and a fork but they will certainly be different from the usual.

The last person was so eager they turned up 30 minutes early and while I was still closing down the detail with the previous couple.

When we started, I said, ‘we only have two plots left.’

‘Can’t I have this one?’ he said pointing to the nearest one.

‘No that’s one has been split into two plots and has gone earlier today.’

‘My friend said it was available and it was near him.’ he replied with a pleading look that made even my whippet, Lottie look away embarrassed.

‘It’s my dinner time and is he going to make up his mind?’ says Lottie now thoroughly bored.

Finally, a decision was made. Lottie was right and a smug ‘told you’ expression covered her face and she acquired a spring in her step as we returned to the pavilion.

I can tell as soon as a full plot was available his name will be in the hat. He even told me which plots needed attention and which he would like!

As Lottie and I walk home I think about what some plots look like to a newcomer and how we will have to sort some out next year when the plot inspections resume. It’s a shame when you have such a huge waiting list such as ours (300% over subscribed) we can’t do more than split some plots.

One good thing is we have reduced our list a tiny fraction, put some on the first rung to allotmenting othering and I happily collected all the dues electronically.