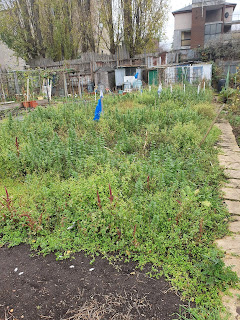 When a plot becomes vacant it can be for a variety of reasons. They may be leaving the area, not physically capable of maintaining it anymore, be suffering a long-term illness, no longer interested, no longer have the time, or sadly died. Invariably, it Is often not a decision of the moment and so the signs may have gradually been visible with an absence from the plot and gradual deterioration in its cultivation. Very rarely is a vacant plot in tip top condition so the person taking it over often must face a reality check on seeing the plot.

All new starters on our to move to a full plot as they become available. This process gives them a chance to become familiar with the site, cultivation and the amount of work and time needed to work a plot. Because the starter plots have been worked, giving these to the new starters is not a big problem as they aren’t faced with overgrown plots and the sheds are relatively tidy.

Having waited some years for the plot the new member’s reaction is often one of ‘plot envy’ as they look at the half plot on offer and then across to other full plots which may be in better locations and are simply bigger.

‘How long do I have to wait for a full-size plot?’ is invariably the question asked. You can almost see the visible disappointment on their face.

The answer is again about waiting, ‘work the plot for a season and pass any plot inspection and you will be eligible to move to a full plot when one comes available.’

‘What is a plot inspection, and will there be a queue for full plots?’ they respond.

‘Each plot is advertised as it becomes available. An existing plot holder may wish to move to it and those on half plots may wish to move up. Some folk like their half plots, and some want to downsize to half plots, some just don’t like the plot on offer. We can’t predict the availability of plots nor the interest. However, upgrades from half to a full plot is the priority.’

‘I see and plot inspections?’ comes the reply along with a puzzled expression. This take time to explain the process and the standards expected.

The management committee are now starting to review each plot as they become vacant and question what needs to be done before it is relet and whether it should be split or remain either a half or full plot. It is a fine balancing act deciding which plots is suitable to be split, how many half plots to full plots there should be and how they should be split. When we do split a full plot it is not always in good shape and it also often involves the two half plots having to share a shed.

Full plots are often a challenge when they become vacant Some say the society should clear all plots and sheds etc before re letting them. This is a laudable approach but often when you turn around those who advocate it are often not to be seen. So you have to balance tiding it up and getting rid of rubbish, with reletting it and helping the new person get it straight. Some say all new relets should be converted to raised beds and model plots but I would strongly err on the plot holder having a choice on how they cultivate and what they cultivate and raised beds are only one options and not for all

Clearing plots can be a challenge. One plot holder recently left us with some 200 empty wine bottles bagged up and hidden behind their shed. You may think that’s easy to move but it isn’t. Others leave shelves of potions and chemicals which have been on the shelves long before ‘used before’ dates were even introduced. Anything worth salvaging has long gone and the threat of withholding their key deposit has little impact as it is insignificant compared to the effort of removing often years of accumulated rubbish.

I recently visited a site where 50% of the plots were vacant and some 50% of these were six feet deep in brambles and overgrowth. There may have been a shed at the back of the plot, but you would need a machete and head to foot protective clothing to find it. I would rather do a bush tucker trail on ‘Iam a Celeb.’ Why this has been allowed to get this bad is another issue but the only way that could be tackled is probably with a JCB digger and a few skips.

The issue of trees is interesting, and we have implemented a tenancy rule stating that all new plantings must be of dwarf root stock, but what about existing trees? When someone leaves you can hardly ask them to take their tree with them. There are slow growing trees and there are others such as fig trees that appear to explode to the sky each year and shade all around them.

Some sheds and erections are a living tribute to bad DIY and must be taken down before they fall down. It would be good to be able to erect a standard shed on every plot or as plots change, but this is not always practicable and could have a somewhat erratic spending pattern as it is almost impossible to second guess which plots are coming vacant next.

Today we have one full size plot and half a dozen half size plots being advertised and let. It always happens around rent collection. We try to get those who are struggling to downsize but it’s as if you have offended them and there is no way they will downsize.

Site management isn’t an easy job and living in a world of compromise and gradual change often isn’t appreciated by the new member, but it is one many challenges many sites have to juggle every day.