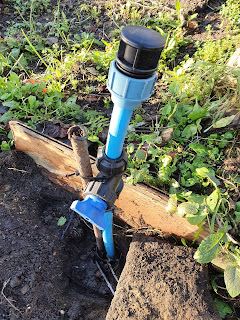 Rain, rain and more rain and all water tanks are full to the brim and the land is sodden, but we still must fix some water leaks and take out two tanks and a standpipe.

‘I suppose I have to sit around all day while you work on the pipes?’ asks Lottie as I put her on her lead and fasten on her winter coat.

‘No, you’re off out with Annie today.’ I reply and a look of relief passes over her face. Even the squirrels will be tucked up today so there is little to cheer up Lottie at the allotments.

Having just had the big water bill we cannot afford to waste water and today’s task is to disconnect a standpipe and the one tank left that is being moved onto rainwater collection duty.

The big blue water 28mm pipes run all throughout the sites and are protected from forks and spades by being inside scaffold poles and where possible being under or abutting the main paths. The challenged is that that although there are stop taps on each tank someone forgot to put stop taps in the main runs. The result is today’s challenge, putting end caps on the main runs whilst not disturbing the pipe labyrinth underground.

I could switch off the main inlet stop tap in the street which will go down like a lead balloon with the Farm, café, and nursery who are all supplied via the same source. So how can I cut into the main run without switching off the water to all or having water flooding everywhere?

This is a collar you tie around the pipe and with straps to seal at each end, You then have an aerosol spray which you spray into the collar. You wait a minute and hey presto, the pipe is iced up under the collar and water is effectively frozen and stopped from flowing. You then can cut the pipe, making sure it is downstream and what residue water is in the pipe pours out and you can fix a new stop tap and end cap. Once done you close the tap and remove the collar. Slowly the ice melts and flows to the tap. You can test the tap is not leaking and then open it to test the end cap,

Well that’s the instructions and theory and now for the live show.

The standpipe appears easy as it has ample room to accommodate the collar the stoop tap and the endcap. However, digging down I can’t make sense of pipework and when everything is attached it decuides to weep at the new joints. A few choice words and a further tightening of the joints and its done and the pipe is secured vertically. Some would suggest it would be better to take pipework off run altogether, but no way am iI lifting the path to discover something that may not be pretty but works today.

The next is the end tank. I turn around and don’t see any little helpers.

I could cap it simply at the tank and leave the pipework in place but we are not aware of the underground run, the tank has already been moved in the past and as it is the end of the run it would be wiser to cap it off at the next tank back, and leave the pipework underground but empty. The challenge is there is not a lot of pipework exposed around the last tank to fit the freezer collar and work. Looking at the main run virtually all of it is buried and has a ‘do not disturb’ sign on the door.

I opt for the simple route to disconnect the tank and cap of after the stop tap. A new support pole is hammered in and the pie is attached.

Job done. We now have to wait till Spring to move the two tanks which have been isolated. We need to let them be emptied naturally them move them to their new home and the final part of our water saving project.

Currently all the rainwater off our huge pavilion roof foes down three drainpipes and into the sewers. This has to now be collected, stored and used to offset mains water usage and lower our bills. It is not a simple task of installing three water butts as the downpipes are at the back of the pavilion and not where folk need them. The water if stored there would simply not get used. So we must reroute the guttering around the pavilion to the side where we can install two big water butts, a reclaimed 300 ltr water tank and the two tanks we have just decommissioned off the mains. This should give us around 2,000 litres of rainwater storage which will be next to the main path and should obviate the need to use some of the mains water.

However, this like most things on the plots looks easy, sounds easy but is far from easy but that is for another day in the New Year, when hopefully a team will help make it happen.

The sky is dark again and the rain is falling steadily down. Time to go home.