Our Journey to Securing a 99 Year Lease: Part 2 ACVs, Leases and Co-ops 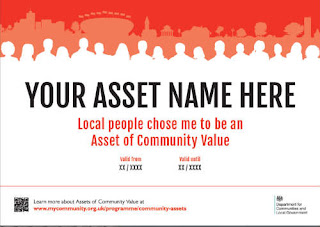 Yesterday I covered the research and findings into our 130-year-old history. Today I cover the actions we took to secure the allotments future.

ACV (Asset of Community Value) Under the Localism Act 2011 land or property of importance to a local community can be recognised and provided with additional protection from development. Voluntary and community organisations can nominate an asset to be included on their local authority's ACV register.

I had come across this relatively new statute in two other community projects and knew the value of registration. I established contact with the National Allotment Society to enlist their help and learn what experience allotments had with the new law. We were in fact one of the first allotments to seek this status which to date had been mainly taken up by real ale pubs! Today a growing number of allotments have registered as ACVs.

The Act only offers limited rights, but importantly puts a clear stake in the ground, such that the land can’t be sold, developed, repurposed, released without community consultation with the registered group who also have a right to bid. There is also a moratorium period which reduces the risk of being driven by other’s timescales and agenda. Importantly these rights are diluted if obtained after a development proposal has been lodged. It doesn’t impact the allotments rights under the 1925 statute but complements them. For ourselves it was a case of stating who we were, the historic value to community, the usage of the land, the benefits it gave al,l and importantly ensured the land was correctly identified.

Each council will have its own process and any application must pass several tests to be accepted. To say our submission was comprehensive is an understatement. We ensured we ticked all the relevant boxes and supplied a host of supporting material. The detailed ACV evaluation and grant by the Borough is available on our website www.iodadas.com/legal-and-other-refernce

The Lease: I discovered quite by chance that Mudchute Associates wished to extinguish their current 30-year lease early and seek a new and longer term. Our ACV gave us the opportunity to place a foot in the Borough’s door and seek our own lease arrangements and in doing so redress the debacle of 1994. I will spare the meetings, the elongated process that took place, having to explain the Allotment statutes and ACV to some who had not heard of either.

At all stages we were advised and supported by the National Allotment Society. The London Regional Representative also attended several our Borough meetings. The key breakthrough came when others dug their feet in to try to circumvent our involvement. We reminded all of the ACV and that brought everyone back to the table.

It was going to prove fraught and complex to hold out for a totally independent lease and we suggested the use of a Head lease with subleases under it. We had many detailed discussions over some very contentious issues. It was clear that this was a different type of lease with the Borough holding the freehold and certain liabilities directly with the allotments, whilst the head lease covered more of the farm business. Our sublease was to all intent was somewhat an independent lease with stronger ties to the freeholder and the head lessee who could take action against the allotments with the full backing of the Borough, who were still bound by the 1925 statute. To cut a long story short we agreed and signed off on formal terms of contract for a lease. It was to be 99 year minus one day, peppercorn rent, self-managed, recognised our statutory status and as long as we didn’t breach the lease, we were secure. We even got assurances re transfer of the Head lease and in the event that of the head lessee became insolvent, our sub lease would revert direct to the Borough.

The protracted discussions would not have achieved what they did without the free legal advice and support given by the National Allotment Society.

In June last year, the proposed lease framework for both the Head Lease and our lease was proposed to the Borough cabinet by the Mayor and passed.

The Society mandate: We kept all members informed throughout the journey asked them to vote on the lease terms offered, the move to an incorporated entity, as well as the constitutional changes we needed to make. We needed to explain in detail the options, and specific steps. The votes taken involved all members and easily achieved the 75% threshold required within our constitution.

The Move to a Co-op: To hold a lease we had to be a legal entity. There were several options ranging from a limited Company, to an incorporated Charity, or even a Trust. None of these appealed. Limited companies can become fiefdoms and directors can become once removed from shareholders. A CIO (Charitable Incorporated Organisation) had an appeal over the CIC (Community Interest Company) but allotments aren’t charities and it was felt we would be abusing the ‘charity’ status. This was our opinion and we respected that many allotment Societies have taken these routes.

We were about to give up when the National Society pointed us to the new Cooperative opportunity under the new Co-operative and Community Benefit Societies Act 2014, which comes under the FCA mutual and society arm and not Companies House nor the Charity Commission. Our membership agreed that the mutuality of a Coop was the way to go and better still we could do this by going under the National Society’s sponsorship and template Rules.

However, we didn’t wish to adopt the template Rules agreed between the National Society and the FCA for sponsored entities. They would require several amendments to fit and every line you altered cost money and had to be sanctioned by the FCA. So, we had to get the mandate from the membership to transfer under the template rules then immediately apply to the FCA for our amendments with the associated formal approvals from our membership to be submitted and sanctioned by the FCA. Once a registered company, this two-staged process was free.

Again, we did it and got our FCA seal and formal approval on the amendments. The Rules are important and the FCA scrutinises and ensures that any Rule changes have followed due membership process and are acceptable under the cooperative mutual approach. We also got the new Rules approved by the Borough and Head lessee by adopting an open and transparent approach.

The hardest thing was moving the new Cooperative to a new Bank. Several banks were unfamiliar with the 2014 statute and did not accept our ‘not for profit’ status and wanted to charge us business rates to bank with them. Only one bank recognised our FCA seal and number straight away and after checking our documents, gave us free banking.

The journey was a hard one, took us four years but was well worth it. We are secure from the developers who are building on the land around us. We now have a very productive and new relationship with the Mudchute Farm that is delivering the obvious benefits we never had. We can now seek to build on our sponsorships and funding to help us with our environmental and community outreach projects. Importantly, those members who follow us now have security of tenure for their lifetime.

We just need to issue the member’s shares certificates and re issue member’s packs, but until the virus eases, that is on hold.

I hope these two articles help others understand what can be done and some of the options available. To date its cost us less than £100 in registration fees with FCA and Land Registry. I cannot stress enough the support, guidance and value the National allotment Society has given us.