It’s a Dog’s Life at the Allotments 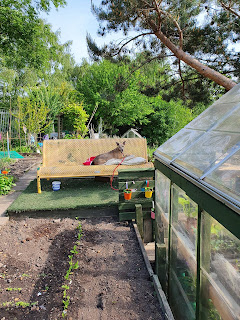 This article was written before the sad news of the passing of Monty Don's Golden Retriever Nigel this week but i hope reflects the true bond between man and dog.

Clap!
I turn and see Lottie trying to catch a bee in her mouth.
Clap! She misses again as her jaws snap empty and the bee goes off grinning, bored and in search of his forage.
‘I’ll get one, one day,’ mutters Lottie to herself as she flops down onto her pillows on the allotment bench.
Lottie is my seven-year-old whippet and like Monty Don’s two faithful Golden Retrievers Nigel and Nellie, she comes with me every time I go to the allotment. But unlike Monty’s two, Lottie does not wish to follow me aimlessly around the plot and is satisfied snoozing on her bench and quietly keeping watch over me and occasionally waking up to snap at the odd low-flying bee, out stare Freddie fox and his friends or bark to clear off that farm cat.
Unlike Golden Retrievers, whippets and other sight hounds require a good fast run out once a day then sleep, eat, demand love and generally nap. They are like cats in many ways except they don’t have attitude and don’t go out in the dark.
‘If you ever catch a bee it will be painful,’ I suggest.
She ignores my advice, stretches as if practicing some new yoga position which usually involves exposing herself in an un-lady like pose and then starts another nap.
My red breasted friend Robin perches himself on the back of the bench and looks down on Lottie. ‘I bet she isn’t aware that Sidney Squirrel is on the plot,’ he says cocking his tiny head to one side.
‘Leave her be,’ I reply turning to look at the pair of them taking over the bench. ‘She’s already had a lot of excitement to day chasing squirrels on her way here.’
I look over the back of the plot to see Sidney poking around under the climbing rose.
‘Now where did I hide that stash of sunflower seeds?’ he asks himself as he continues to search. He took enough sunflower heads to seed half the Island and already self-seeding sunflowers are coming up all over my plot, next door’s plot and half the plots on the site.
‘I bet she didn’t catch any squirrels,’ offers Robin looking at Lottie.
‘No. I am glad to say she didn’t, but she did come close. There was a Mexican standoff with one and they were some six feet apart and they both froze. They tried to out stared each other. It was if they had never been here before and wondered what to actually do. The squirrel blinked first and scurried left and up a tree before Lottie could get her running shoes back on.’
‘Was she wearing her red coat?’ asked Robin.
‘Of course, that’s why she has it on so they can see her coming,’ I respond, trying to whisper so Lottie can’t hear.
‘I can hear every word you are saying,’ pipes up Lottie hardly stirring and wondering if there is something in what I have said.
‘I could have caught her, but I only chase those that run away,’ Lottie says with a somewhat proud expression now across her face.
‘It’s just a game to you, but what about the squirrel?’ asks Robin.
‘Did you say Sidney is here?’ Lottie asks raising her head off her pillow, quickly changing the subject and looking straight at Robin and then attentively around the plot.
‘Was here,’ responds Robin and with a broad grin and with a wave of his wings flies off.

At this Lottie looks at me, then at her pillows and decides its time for a nap.
‘Tell me when its time to go home. I am hungry,’ she says Lottie shifting both the subject.

A short while later Lottie adopts a new pose which mimics the ‘downward dog’ yoga pose. She then looks over to me and has a wake up shake. This is like a wake up call to her body and I know I am being to told allotment time is up. I dutifully obey Lottie's request and start to put away my tools and finish my daily allotment chores.
‘Pillows,’ she reminds me as she promptly jumps off her bench.
I pick up the two pillows which are warm to the touch where she has been sleeping and deposit them back in the shed.
On leaving the plot Lottie has a little ritual. First, she nibbles some goose grass as I lock the gate then 20 yards or so later in the same spot as yesterday and the day before, she relieves herself. A further short distance and it’s time for a poo and that means a poo bag collection. It’s as if she knows the dog litter bin is only five yards away and wants to save me having to carry a bag to the next bin or all the way home.
Strange, Lottie can be on the plot all day and never relives herself once, but as soon as she is outside the gate it's time to go. I think I have Lottie ‘Lottie Trained’, or is it she that has me trained?