The allotments across the Isle of Dogs helped feed the East End of London during World War 2. Dock workers and Island families used every piece of land available to grow much needed food. The allotments already had 365 plots on the Mudchute and this was extended with sites around the island and most notably a further 140 in Millwall Park. The extent of the plots can be seen from the pictures (above and below). 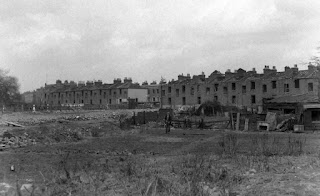 The Island’s ‘ox bow’ river shape in the Thames made it and easily recognisable for German pilots aiming for their prime target, the docks.

In the middle of the allotments a new anti-aircraft battery which was established (left) to defend the docks. The anti-aircraft main hut was even hit by the bombers on the very first night raid on the 7th September 1940 (below left). Houses and warehouses all over the Island were badly bombed and eventually demolished, but the vital work of the docks and the allotments continued. 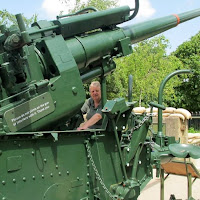 Today, an Ack Ack gun placement stands proud in the middle of the Mudchute Farm where one of the guns once stood. It is not the original gun, but one found in a field in Shropshire and transported and resisted earlier this century on the Mudchute. It remembers those that were stationed there to protect the docks, night after night during the Blitz.
The allotments today also maintain a memorial area and gardens to remember past members which include war heroes James J. Gordon RN DSM and Nick Avery RAF. It is fitting that these memorials are sited along the bank where the batteries and huts were during the war. 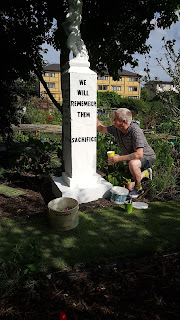 We will remember them.

The author is indebted to the research and archive provided by Mick Lemmerman and the work and archive of the Island History Trust which enabled this untold story to be written.